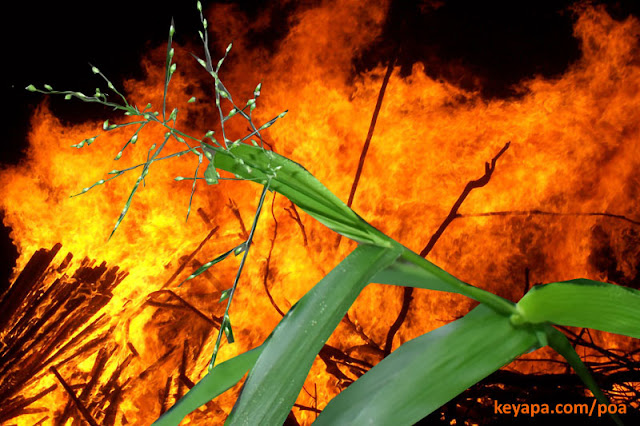 It's not an exaggeration to say grasses as a family have adapted amazingly well to most habitats on earth. But there is at least one species that takes that adaptability to new levels.
Living in the active geothermal areas of Yellowstone National Park takes some major adaptations. It is an extreme and hostile environment with rhizosphere temperatures exceeding 40°C. Many proteins denature above 41°C, and in people a body temperature at 43°C or above normally results in death or at the least serious brain damage and cardio-respiratory collapse.
In such an extreme environment, there are only nine vascular plants that have managed to successfully colonize this habitat. Chief among them are the grasses, which are both the most prevalent and most heat-resistant species in the area. But the award for the most extreme plant goes to Dichanthelium thermale (formerly a subspecies of D. lanuginosum) , which was flourishing in soils with an average of 44° C and a recorded maximum of 57°C! (Stout and Al-Niemi, 2002)
When researchers studied D. thermale, they found that it was even more amazing than they initially thought. This grass species had little problem living at the absolutely mind boggling temperature of 65°C for days on end, and they discovered that this ability was the result of a symbiosis with a new endophytic species of the fungal genus Curvularia (Redman et al, 2002).
Curvularia protuberata was found in the roots, leaves, crowns, and seed coats of D. thermale, and neither the grass nor the endophyte could survive on its own above 38°C. But when endophyte-free grass was inoculated with the fungus, it regained its remarkable thermotolerance.
The researchers surmised that this protection from heat could be the result of several possible mechanisms. One possibility is that the fungal endophyte produces cell wall melanin that may dissipate heat along the hyphae and/or complex with oxygen radicals generated during heat stress. Another possibility is that the endophyte may act as a “biological trigger” that allows the symbiotic D. thermale to activate stress response systems more rapidly and strongly than non-symbiotic plants.
The symbiosis became even more complex when researchers announced that they had found a third party in the relationship several years later. It turns out that the fungal endophyte was infected with a double stranded RNA virus, and that its ability to confer thermotolerance on D. thermale was dependent on this infection!
Endophyte-free D. thermale that was inoculated with the fungus+virus survived in heated environments, whereas endophyte-free D.thermale  inoculated with the fungus without the virus did not survive in the same environment (Márquez et al, 2007).
The unraveling of this complex symbiotic relationship could even have applications in agriculture. When tomato plants were inoculated with the wild-type fungus C. protuberata, their tolerance to heat was improved, albeit only slightly, indicating that the mechanism behind this thermotolerance may be conserved among many different plants.
But this potential novel application in the future would not have been thinkable if it were not for the humble D. thermale in Yellowstone and other geothermal parks. So as we marvel with awe at such an intricate and beautiful example of symbiosis, be sure to also give a respectful nod at this one badass thermotolerant grass and its fungal and viral partners!