One of my favorite group of grasses are the so-called sandburs or sandspurs.

These are species in the genus Cenchrus, and they sport spikelets ensconced in armored, thorned burs. There are usually several spikelets nestled within the shell.

I find the resulting structures (which are sometimes vividly colored) attractive in a dark and deadly way; botanical weaponry that is achingly beautiful in its form and function.

But the main function of the burs is actually more mundane, as they are principally used to disperse the seeds of the plant via animal hosts. The thorns frequently catch onto the skin or clothing of some passing host, and the entire bur is then carried far away from its original location. There have also been studies that show the bur floats and aids in dispersal via water.

I encountered sandburs in NJ, and also in the Philippines. In both cases, the species was not in abundance in the area, but the small stature of the grass (and its annual nature) might cause one to underestimate their prevalence.
I finally came upon a sandbur species here in Florida while walking between homes that were under construction. The plants were in a sunny location in what would be the front lawn in the completed home.
I typed it as Cenchrus echinatus (which is called Southern Sandbur in some places here), based on the globular, pubescent bur, which has upper (inner) spines fused at the lower part and a ring of bristlelike lower (outer spines) near the base. 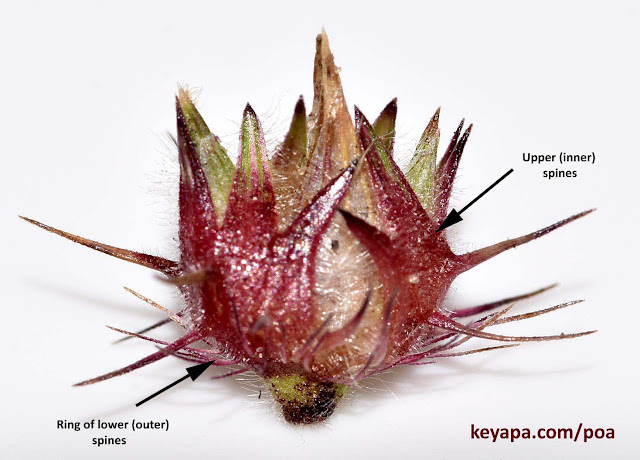 In my eagerness to take photographs of the cluster I accidentally brushed against one of the seedheads and a bur stuck to my right middle finger. I absently brushed it off, and was annoyed to discover the spine had broken off and was still lodged in my skin.
When I got home and my wife and I tried to remove it, we found out that the spine had penetrated deeper than we thought, and it was impossible to dig it out without creating a deeper wound. When I visited a doctor later, she could not make it out (and I did not feel it when she applied pressure on the area), so she decided to leave it in and said that the small piece would be pushed out by my body as it repaired the wound.
And so now, not only am I made mostly from grass because of the food that I eat, but I probably have weaponry from a grass forever lodged under my skin. I truly am becoming an Orang Poaceae!
at November 05, 2022
Email ThisBlogThis!Share to TwitterShare to FacebookShare to Pinterest
Labels: Cenchrus, Macrophotography