Rushes are Round: Finding Luzula in Great Smoky Mountain 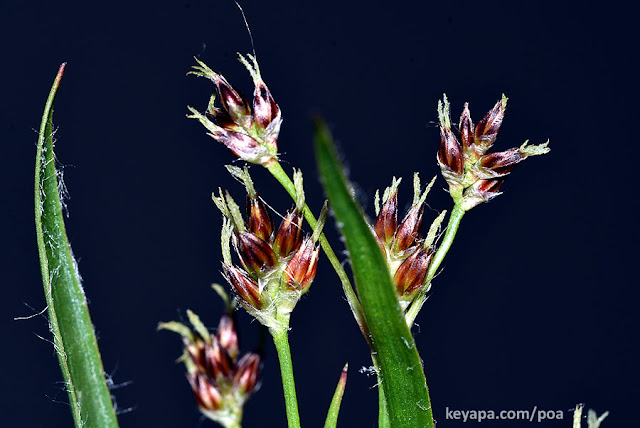 Although this site is focused on the Poaceae, the other members of the order Poales can oftentimes be mistaken for grasses. This is especially true for members of the families Juncaceae (rushes) and the Cyperaceae (sedges), which are sometimes even given common names that mistakenly identify them as grasses.

In this case, there is an old adage that might help people separate the three. It goes:

Sedges have edges. Rushes are round. Grasses are hollow. What have you found?

Sedges have edges, rushes are round, Grasses have nodes all the way to the ground.

So, if the stems have corners and edges (roll a stem between your thumb and forefinger), then it's likely what you just thought was a grass is actually a sedge, and if the rounded stems are not hollow and have no nodes spaced along their length, then you probably have a rush.

This rhyme helped me during a hike along the Grotto Falls trail in Great Smoky Mountain a couple days back, when I spied some graminoids near the edge of the wet path that had lots of spiky inflorescence at the top. They were notable because this early in the season, almost none of the grasses had any reproductive structures out yet, 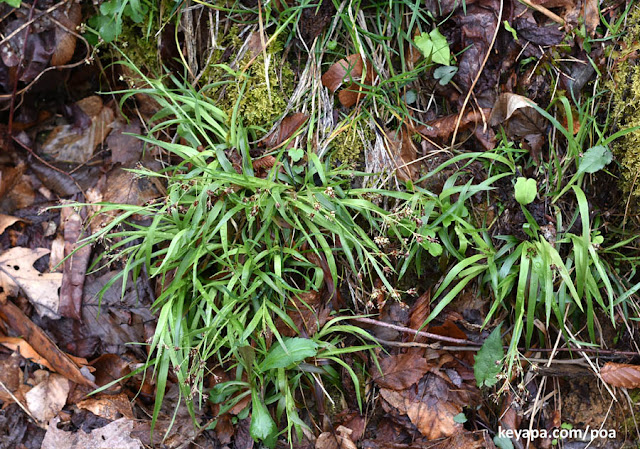 This particular specimen seemed to be a grass on first look, but when I took macro shots of the flowers and felt around the stems, I decided I was probably mistaken. I could not find any solid nodes along the stems (although granted, this early in the season, everything was still pretty low to the ground), and the round stems seemed to have a solid interior.

Now, I am horrible at identification, but I believe what I found on that day was Luzula multiflora, or the common wood rush, a member of the Rush family. The long white hairs on the leaves and stems indicates it belongs to genus Luzula, and the multiple flowers on variable length stalks separates it out from L. acuminata.

It is a circumpolar species but is listed as relatively scarce in this national park, so if I identified it correctly, then I was quite lucky to see it during that hike!

at April 14, 2022
Email ThisBlogThis!Share to TwitterShare to FacebookShare to Pinterest
Labels: Graminoid