Lying just an hour and a half walk away from one of the most popular tourist destinations in Great Smoky Mountains National Park is a large grassy area that sits atop a mountain. Since it is still below the timberline, all around this open expanse are tall spruce and fir trees, which provide a very shaded environment for hikers who venture out from Clingman's Dome and want to do the 2.5 km trek to this somewhat anomalous area. 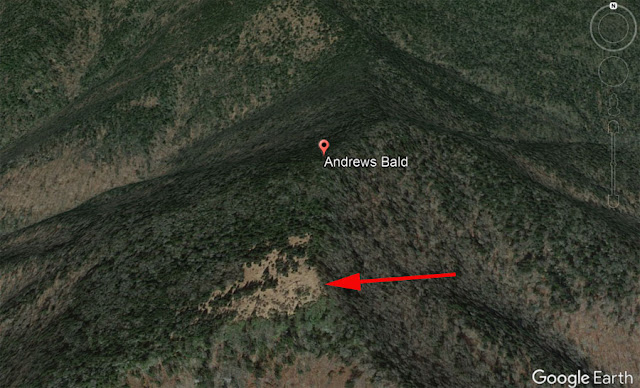 The hike itself is moderately easy and quite peaceful, although the almost continuous upward incline on the way back was somewhat strenuous. Recent upgrades to the trail provided nice steps and above-ground planks at certain points that allowed us to move quickly over the sometimes muddy ground.

After about an hour and a half we finally burst into the open air and gazed upon an amazing grassy meadow that covered about 1.6 hectares of the mountain top. The change from the dark forested interior to the sunlit top was fairly dramatic, and many people had draped themselves over the lawn-like ground close to the opening, although it was only April and most of the grasses had yet to green and were a dry golden color.

We had finally arrived at Andrews Bald, which at 1800 meters (1.8 km), is the highest so-called "bald" in the Great Smoky Mountains National Park.

These "balds" are grassy meadows below the timberline which are found in the southern Appalachian Mountains, and the origins of most are shrouded in mystery. The dominant grass is usually Danthonia compressa, but other grasses such as redtop (Agrostis alba), timothy (Phleum pratense), Canada bluegrass (Poa compressa), Kentucky bluegrass (P. pratense), and red fescue (Festuca rubra) may also be found.

Some researchers believe Native Americans originally cleared the areas as hunting grounds or lookouts, and there are historical records that seem to indicate that settlers cleared some of the balds for grazing. There are even some who postulate that the balds had been originally founded by prehistoric herbivores, and then maintained by human hands thereafter.

Whatever the case, there is no doubt that the balds had been used as grazing land during the 1800s. The cattle and sheep that were herded up onto these ridgeline areas during the summer months kept the land open, but after the formation of the national park and the cessation of grazing in the 1930s, trees and shrubs have been slowly reclaiming the land.

A quick look at historical satellite imagery from Google Earth shows that Andrews Bald went from being around 2.5 ha in size in 1995 to around 1.6 ha in 2017 (see image below), and if grazing continues to be excluded from the area, then it is probably inevitable that the bald will continue to shrink in the future.
But for now, visitors can continue to enjoy the relatively open vista possible in Andrews Bald. It may not be the vast green expanse that it used to be, but I still highly recommend it if you ever visit Great Smoky Mountains National Park.
at April 18, 2022
Email ThisBlogThis!Share to TwitterShare to FacebookShare to Pinterest
Labels: Mystery