Goodbye to an Old Forest Friend 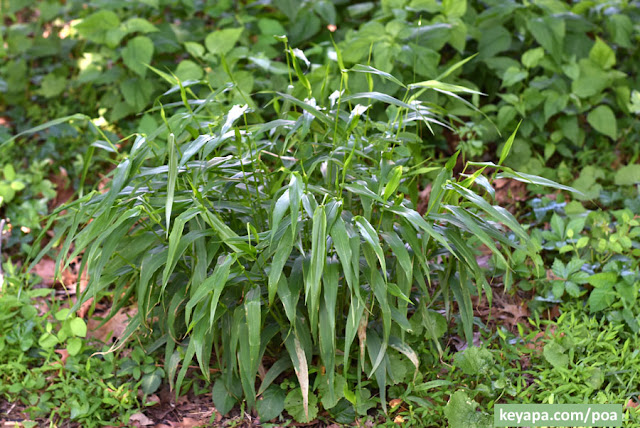 I have mentioned how we like hiking, and more times than not we tend to hike in heavily shaded areas like closed canopy forests. This is mostly because my wife is not usually a fan of walking under the full sun.
In such places, grasses are not the major component of the understory. They tend to occur in small patches or even in single tufts in the dimly lit ground. Where they tend to occur in masses, the species are usually shade-tolerant aggressive invaders like Microstegium vimineum (Japanese stiltgrass) or Oplismenus undulatifolius (Wavyleaf basketgrass).
But one of the more numerous of the grasses that thrive in the shade is one that I personally find attractive. Dichanthelium clandestinum and its ilk have broad dark green leaves and a habit that you can't help but love.
I encounter it relatively frequently here in the Northeast, and I have stumbled upon it once or twice in Florida.
I also see specimens of this grass close to my home in New Jersey whenever I go for my afternoon walk. They sit alongside the paved path around a nearby lake, and I make it a point to always stop and marvel at the beautiful forms that grace the lakeside and the nearby wooded area.
These are such distinctive critters, and interestingly enough, I see them not only in deep shade, but in brightly-lit areas as well, a testament to the adaptability of this grass.
This species also has a somewhat unusual flowering scheme, as I mentioned awhile back in another post. During early summer it produces "normal" flowers which are pollinated when open ("chasmogamous"). Then later in the season, the same individual has closed flowers hidden in the sheaths that will be self-pollinated ("cleistogamous").

I think this will be my last season in this home, so it saddens me that this will also be the last time I see the D. clandestinum that make their living around the lake. They have been my yearly companions in my jaunts under the shade, and I wish them well. Perhaps someday when I come to visit, I will again walk around the lake path, and say hello to these old friends.

at June 10, 2022
Email ThisBlogThis!Share to TwitterShare to FacebookShare to Pinterest
Labels: Dichanthelium