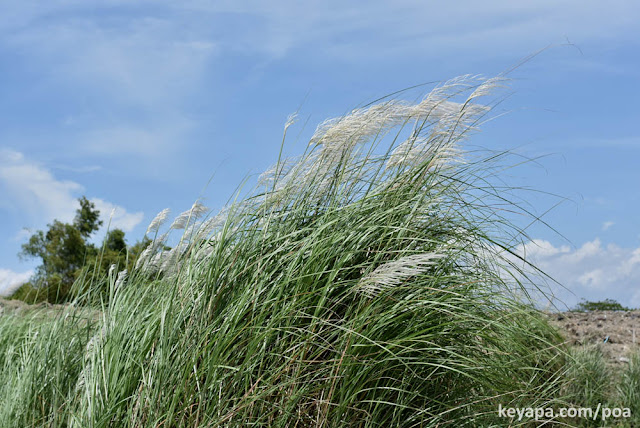 I first spotted the fields of Saccharum spontaneum (talahib) while travelling towards the SM Bacoor shopping mall in Bacoor, Cavite, Philippines. The grasses were in full flower, their white flowers waving languidly in the breeze, and their culms rising more than 4 meters to tower over some of the shorter urban structures around them.

Entranced by their beauty, and by the fact they were smack dab in the middle of a bustling city, I visited them again yesterday. 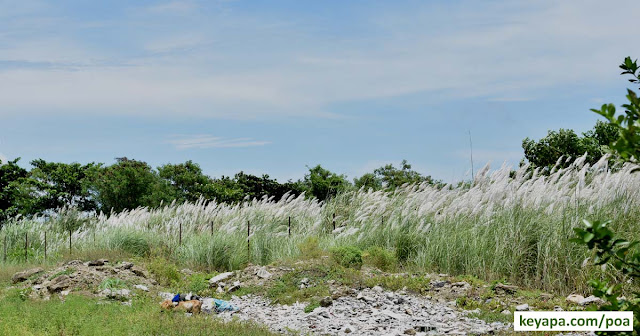 Along with Imperata cylindrica (kogon or cogongrass), this species forms vast grasslands all over the country, and it is hypothesized to be one of the progenitors of cultivated sugarcane, which produces most of the sugar we use today.

Unlike S. officinarum (cultivated sugarcane), S. spontaneum is widely considered to be a "weed". although various uses for parts of the plant have been developed locally. For example, it is heavily used for making various items, such as hats, brooms, baskets, walls and even furniture. In terms of its medical uses, it has been used as an astringent, emollient, refrigerant, diuretic and aphrodisiac.

Its leaf blades are somewhat narrow (unlike S. officinarum), perhaps a cm or so in width, and it has a very prominent white midrib. The leaf margin are serrated, and you can feel the sharp edges by running your finger (carefully) down the leaf.

The Saccharum complex of species has been quite muddled and is polyphyletic. Hybridization between wild species and cultivated ones have resulted in a range of intermediate forms. In general, the cultivated S. officinarum has somewhat wider leaves and does not form extensive clonal clusters via extensive rhizomes. whereas S. spontaneum forms strong rhizomes and can thus quickly dominate an area as it spreads laterally.

In order to examine the grass further, I gathered some samples of the inflorescence and took some macro shots when I got home. 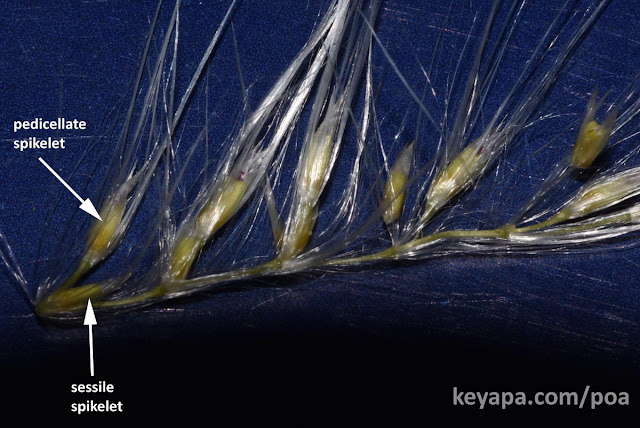 The S. spontaneum spikelets come in pairs along the inflorescence branches. They do not have awns. One spikelet is pedicellate (has a stalk), while the other does not have a stalk ("sessile") and is fertile. The fertile spikelet has 2 florets, one of which is fertile. A mass of extremely long white hairs rise from the base (callus) of the spikelets. The hairs are 200-300% the length of the spikelets.

I have to admit I found the talahib fields beautiful, no matter that they were mainly composed of plants that were sometimes considered "weeds". The plumed inflorescence and towering presence of the grasses  en masse injected some beauty into the rather dirty and polluted city environment.

at September 12, 2022
Email ThisBlogThis!Share to TwitterShare to FacebookShare to Pinterest
Labels: Macrophotography, Saccharum