Carabao are these huge bovine grazers that are much cooler than cows and are a fixture of tropical Southeast Asia.

They are used in harness to help plow the soil for farming, and their milk is for drinks and eating. When curdled the milk becomes a delicious soft white cheese called kesong putih. You can even pour the milk onto white rice, sprinkle some salt, and dig into the yummy dish (it's one of my favs).

One of the grasses in the Philippines is called Carabao grass (Paspalum conjugatum), due mainly to the fact Carabaos (although not cattle) seem to love this species.

On a second (shorter) botanizing expedition into the semi urban wilderness of the town I stayed in, I encountered a small cluster of grass that I at first thought was this species.

The dark green leaves had an interesting crinkly quality to them that reminded me of Oplismenus undulatifolius, and the specimens crawled around on robust stolons that allowed it to monopolize the shaded area under a tree.

Each hairy node produced a new ramet, along with short fibrous roots.

I typed it first as Paspalum conjugatum (carabao grass), but after some research decided that it was Axonopus compressus. The dark green leaves and penchant for shade pointed to this species, and the inflorescence nailed it.

This is another species used as turf grass in the local area, but it is also used as a cover crop under oil palms, where it suppresses weeds using allelopathic chemicals (Samedani et al, 2013).. 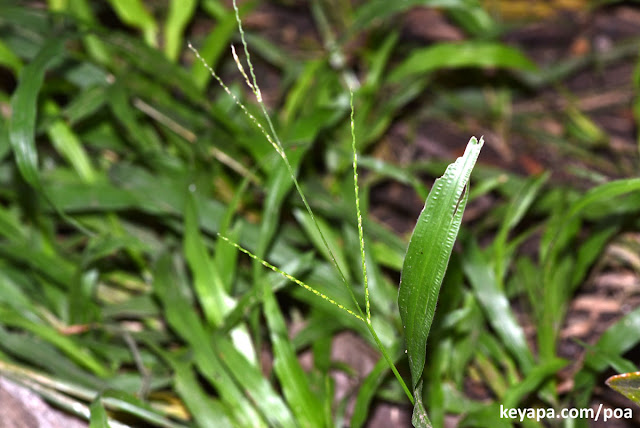 Misidentifying grass species like I initially did with A. compressus above is likely not that unusual, and it seems I also did it for one of the more common and large grasses in the country

Awhile back I posted about the Destructive Duo of Imperata cylindrica and Saccharum spontaneum. The photos in that post were from the periphery of Taal Volcano in the Philippines, and I had described the taller species in them as S. spontaneum, which is called talahib here..

I had a chance to visit the area in Tagaytay last week, and I again encountered the same very tall species, along with the shorter I. cylindrica. This time I toured a national tourist attraction called the People's Park in the Sky, which dates from the dictator Marcos era and was supposed to have become a mansion at the time.

The tall grass was just as majestic as before, their flowerheads hanging high above the crowds, and the species covering a large part of the hillside. I flew my drone to take pics, and you can see me in the orange cap as I positioned the DJI Mini 2.

The arrangement of the rather stiff leaves reminded me of Phragmites australis or Arundo donax, although the very prominent white midrib reminded me of other Saccharum spp.

As always when I encounter an unknown species, I took macro photos of some dried spikelets, and I was surprised to discover that the large grasses were definitely not S. spontaneum!

The dried spikelets had very long and twisted awns, which is not characteristic of awns from S. spontaneum. The awns are instead a characteristic of Erianthus contortus and E. alopecuroides, although this is likely another species entirely.

Finally, I also came upon some specimens of what I believe is Echinochloa crus-galli. This species is commonly known here as bayokibok (Tagalog), lagtom (Bikol), marapagay (Ilokano), as well as some other common names probably.

Like some other weedy grasses, I encountered this species as well in New Jersey, so you can tell that it is a really adaptable organism. In the Philippines, it is one of the worst weeds in rice paddies, and has become resistant to the herbicides used against it.

After 2 weeks, my time in the Philippines had come to an end, and although it was short and busy, I was gratified that I was able to spend some time botanizing in the hot and humid tropical clime. I love exploring new and interesting places, and discovering, identifying, and learning about the various species that I encounter in my travels.