How many blades of grass in the world? 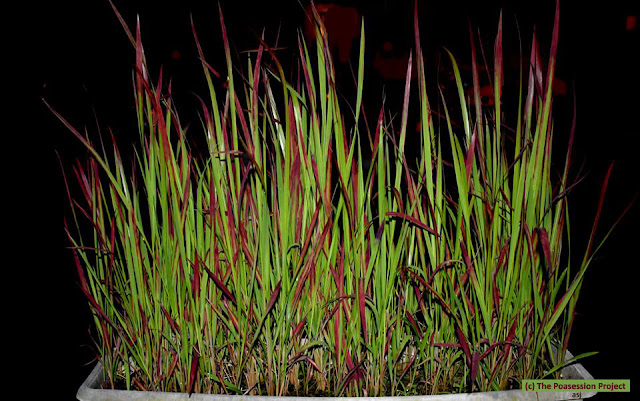 Note: I welcome corrections to my calculations. Math was not exactly my best subject!
How many blades of grass in the world?
This is a question sometimes asked by people, and one which seldom gets any answer.

In fact, it's near impossible to resolve this question, with one major factor being that different species of grasses can attain different final maximum densities.

However, it is fun to calculate the number of blades of grass for narrower and more limited scenarios.

For example, would it be possible to calculate the total number of blades worldwide for a single species?

In this case, we would need to know 2 things: The density per given square area of that species, and the total area covered by the grass worldwide.

Only a few grass species have had their total coverage area estimated by researchers, and one of those is the aggressive Imperata cylindrica (cogon grass). There are some estimates that this species may cover as much as 500 million hectares worldwide, although the veracity of this staggering number is open to question.

Nevertheless, if we take this number as a given, and add in potential densities of cogon grass blades (0.25 per square cm or 2500 blades per sqm), then we quickly get really large numbers.

Since there are 10,000 sqm per hectare, then 1 hectare of cogon grass can have around 25 million blades of the grass. Multiply this by 500 million hectares and you get the absolutely huge number: 1.25 x 1016 blades of cogon grass in the world!

In order to put that number in perspective, if we take the current human population of the world at 7 billion people, then there would be almost 2 million blades of cogon grass for every single person.

Or to put it another way: if you lined up each cogon grass blade every meter in a straight line, you would get a line of plants that stretched 12.5 trillion km, or an absolutely mind boggling 1.3 light years! The distance from the sun to Pluto is only 5.9 billion km, so you could potentially have more than 2100 lines of cogon grass blades stretching from the sun to Pluto!

Now we can take it even one step farther, and examine a "fictional" situation.

How many blades of grass would there be if a species of grass covered all the land area in the world?

The winter annual invasive Taeniatherum caput-medusae (medusahead grass) has been seen to have as many as 21,500 plants per square meter, which comes to around 21.5 billion plants per square km. Since total land area of the world is approximately 130 million square km, then if this species covered the entire earth, then we would be talking about 2.795x1018 plants!

To put this number in perspective, this would be about 400 million medusahead plants for every person in the world!

Or to put it another way: if you lined up each medusahead grass every meter in a straight line, you would get a line of individuals that stretched 2.795e+15 km, or an absolutely mind boggling 288 light years! The distance to the nearest star Alpha Centauri is only less than 5 light years.

Such amazing numbers mean that grasses are likely the most populous meter-scale organisms on the planet today!

at July 23, 2022
Email ThisBlogThis!Share to TwitterShare to FacebookShare to Pinterest